First off, may I welcome all the new followers.  Whilst I may not have as many as Justin Beiber or Lady Gaga I feel really humble that some people are interested enough in my modelling to follow me.  Thank you all.  Thanks also for all the nice feedback regarding the updated layout, it seems to be an improvement everybody likes.  Phew.

Anyway, you may remember from the last installment I said I was going to do a Step By Step (SBS) of my next model, the Trumpeter Z31 German Destroyer.  Well, I was half right.  I am doing a SBS however that model will have to wait as I have been commissioned to build a heavily chipped Japanese aircraft for the AK Interactive weathering magazine.  Seeing this article will only be concerned with the chipping weathering effect I thought I'd do the article here so to speak and Spud, the editor who is a mate of mine (even if he used to be in the Air Force) encouraged me to publish the article.

I had a trawl through the internet for examples of heavily chipped Japanese aircraft and most seemed to be things like the Ki-84 (which I have already modelled) and other fighters.  I thought about getting a Ki-61 or Ki-44 in 1:32 however these days Hasegawa's pricing policy is not really compatible with a limited budget so I was delighted to see a 1:48 Hasegawa B5N2 Kate in the specials section at Hannants.  At just over 20 quid I couldn't resist, especially as I had found a particularly battered example on the web. 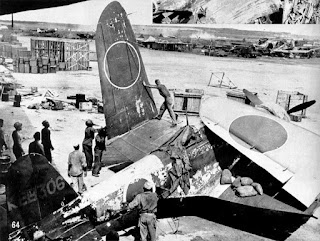 Now, I won't be doing this exact aircraft as trying to match those chips will be a nightmare so I'll be modelling a fictional aircraft from the same location and unit and in a similar state of mingingness (not really a word but I like it).

On to the build.

As ever, I grabbed the Eduard photo etch update set which hopefully will add a few nice details here and there.  Work started in the cockpit and as normal, I try and glue together as many parts as I can before painting.  Eduard plate their photo etch with a nickel silver colour which to be honest I don't really like therefore I usually polish this off first so that's why it looks brass in the pictures.

You'll also note I've added some extra wiring; now I didn't have any cockpit photos of this aeroplane so I used a bit of modeller's artistic licence, I hope you can forgive me.  The seats have been soldered and seeing I normally have a nightmare trying to glue seat harnesses to seats I soldered these on as well.  Note there are only lap belts which was common in Japanese aircraft of the period. 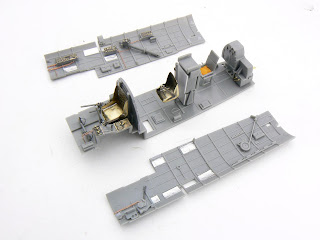 The injector pin marks are a bit of a nuisance.  I covered some with plastic card, filled some others and also left some.  These ones were on the cockpit side walls and would be very hard to remove.  Let's hope that the cockpit openings are small enough that they'll be hidden! 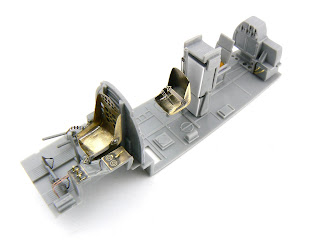 Now for some paint.  I put out a call on Hyperscale.com regarding the colour and got an absolute mine of information back, much of it contradictory.  From all the blah I received I decided to use a Tamiya colour Nakajima grey and added a drop of buff and field grey (actually a green) to wash it out slightly.  In addition, some Gunze Clear was added to the mix to make it glossy, this is important for the weathering. 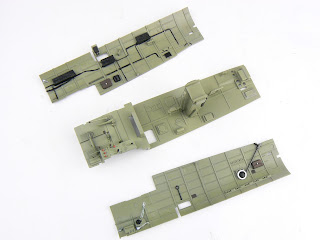 The instrument panel is not coloured, in fact non of this set is so it must be an older one.  It was quite nice going back to the old days with a brass panel and film. 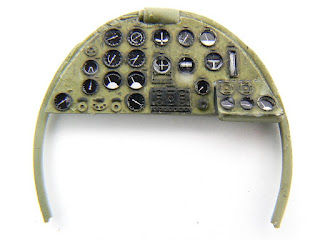 Now for the weathering.  Initially I used AK Interactive's Dark Streaking Grime as a pin wash which is thinned slightly with white spirit and touched into the nooks and crannies.  Because the base coat is gloss capillary action works to draw the colour into the recessed detail.  When dry (about 10 minutes), the excess is then removed using a clean brush and thinner.

A matt coat of varnish is then followed by a filet er and I used AK Interactive DAK filter thinned again with white spirit.  The matt coat will spread the filter over the parts leaving a nice tonal shift.

I also added the chipping using the sponge method back up with a small 4/0 brush.  I used Citadel bolt Gun metal mixed with Vallejo Dark Grey for contrast as an aluminium colour would be too light. 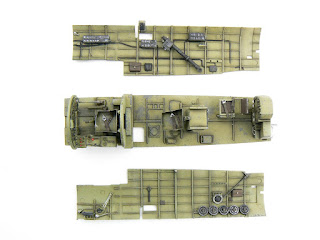 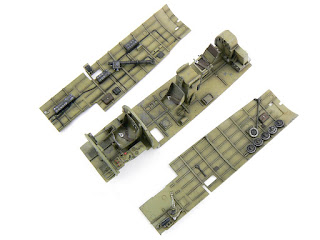 That's it for this installment.  Next up will be the airframe construction.  If you have any points, criticisms or feedback then I'd love to hear them so please drop me a line.
Posted by Jamie Haggo at 14:35