Hi everybody, I think its a fair comment that I haven't exactly been prolific with either the modelling or the blog entries and the reason is eluded to in the title of this blog entry/

2014 has been a year of considerable hard work and change which has had a big impact on my modelling output.  For the first quarter of the year I hit the books hard as I had my A2 exam, this is a 2 part assessment by CFS's Exam Wing.  First off you fly with the examiner who pretends to be a student, first you teach a basic early sortie from the syllabus, when he's seen enough he morphs into an advanced student who is having difficulty with an advanced aerobatic manoeuvre (or in my case the examiner was fairly new to the job and quite unfamiliar with the Tucano and as such he was struggling with the reverse stall turn, for real so no pressure sorting that one out!).  You then fly your own aerobatics and advanced flying manoeuvres before suffering a simulated emergency, once in the circuit you teach some circuits and landings.  All that packed into around 1:30 hrs of flying.  Then it's a cup of tea followed by a 3 hour grilling on everything; aerodynamics, Tucano tech, met, instructional theory, flight instruments...the lot!  Only at the end of all that do you get told if you've passed!  This is the pinnacle for a UK Armed Forces instructor, it is a professional qualification which will open many doors for me professionally and I hope all that intensive study will pay off in the future!

That wiped out the first third of the year so very little if any modelling was done!  However, I've also changed jobs!  Acting promotion and a desk job!  Arse!  The pay rise and pretend half stripe is very welcome but I do miss the flying terribly, especially the Tucano, and I'm already investigating ways of escaping HQ and getting back where I belong, with a squadron, flying! 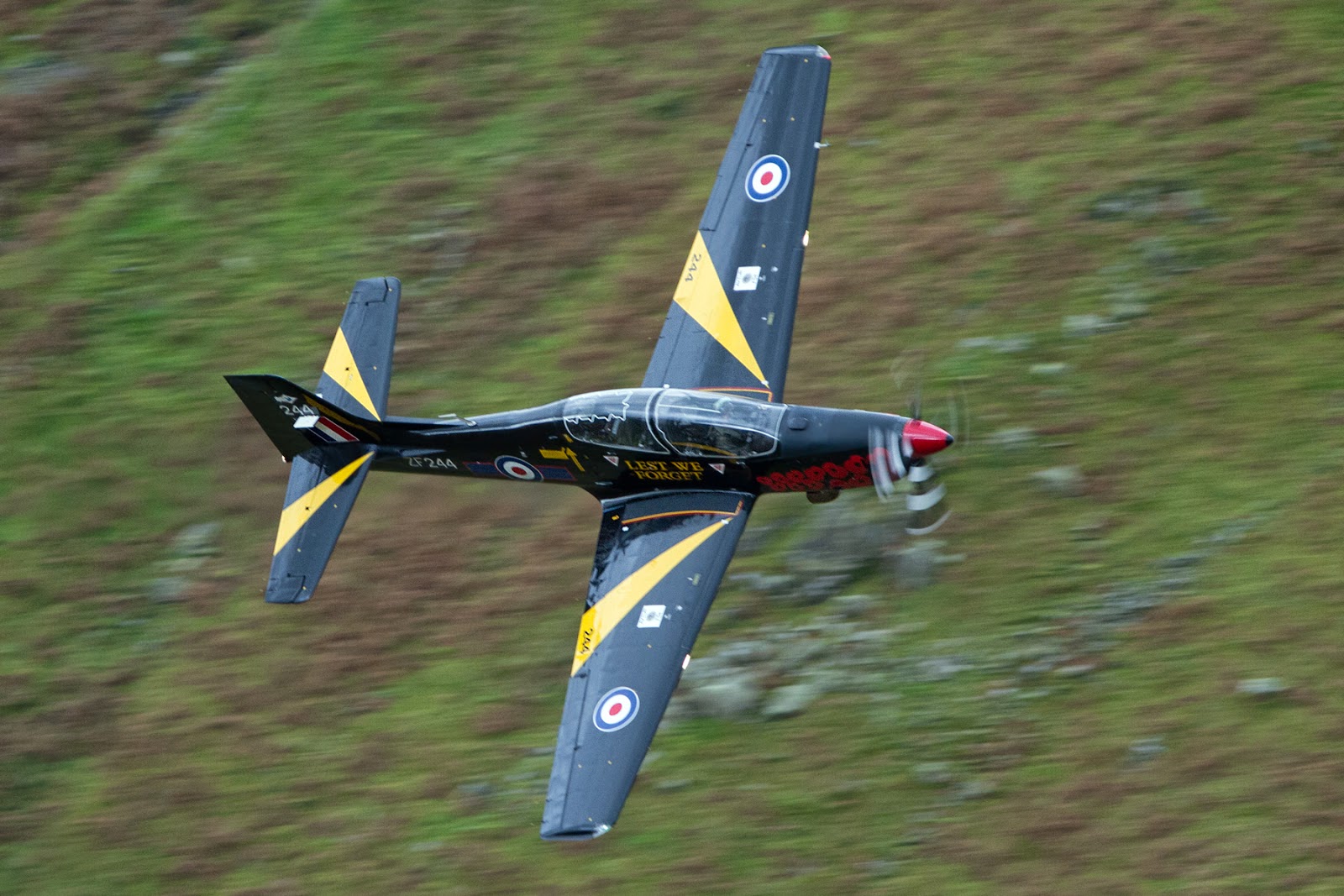 Me flying my last ever Tucano sortie, low level formation through the lake District.

I've also moved house which funny old thing kyboshed any thoughts of modelling for quite a while.  Still, it’s a great place and finally all the kids (4!!!) have their own bedrooms so now there is no passing the buck on the untidy state of them!

So, after that rather long winded explanation of why I’ve only finished 5 models this year; here are (some of) those models!

First up is the Revell Hunter in 1:32, this model had everything thrown at it; True details cockpit, Eduard PE, Flightpath PE, Master Barrels pitot.  I also sprayed all the markings using the superb Miracle Masks by Mal Mayfield.  This model featured in MAI magazine. 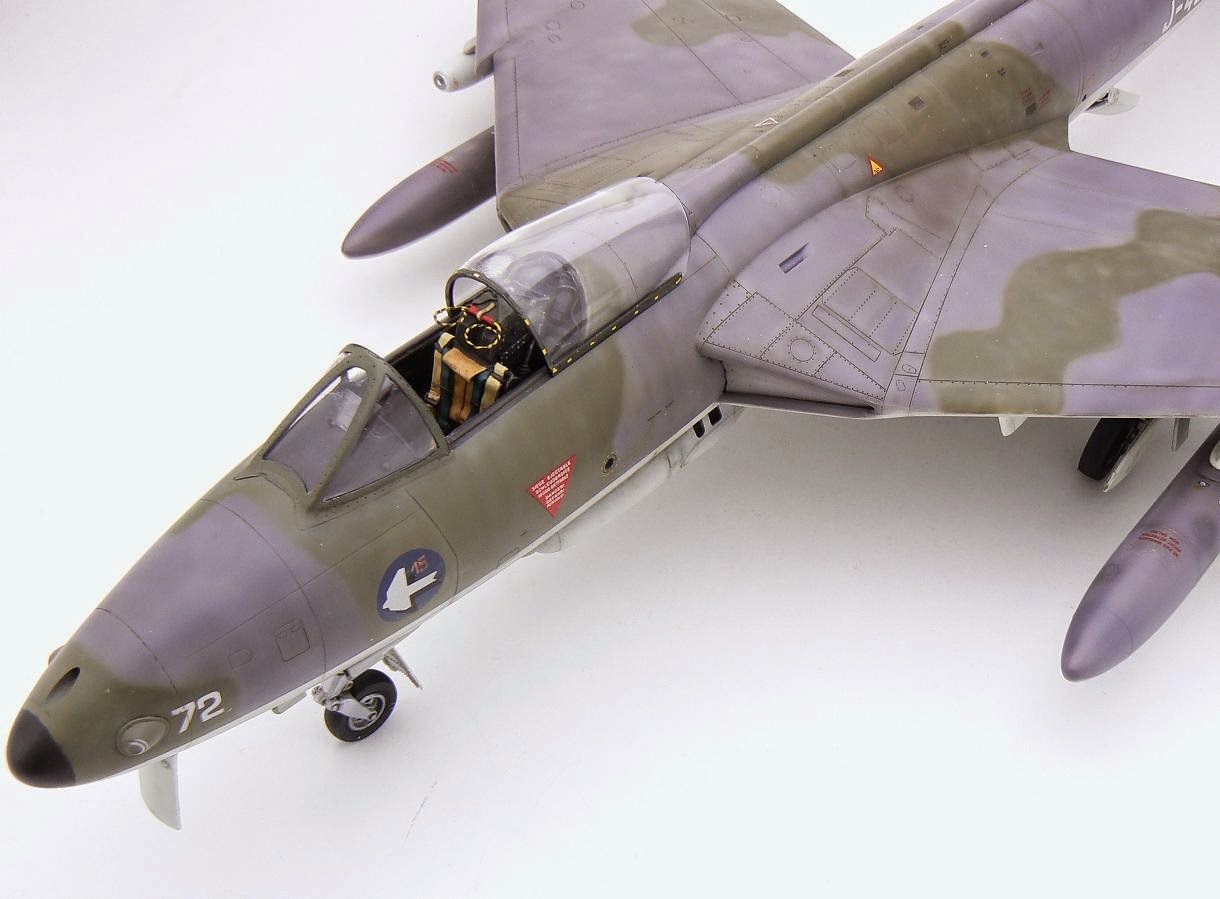 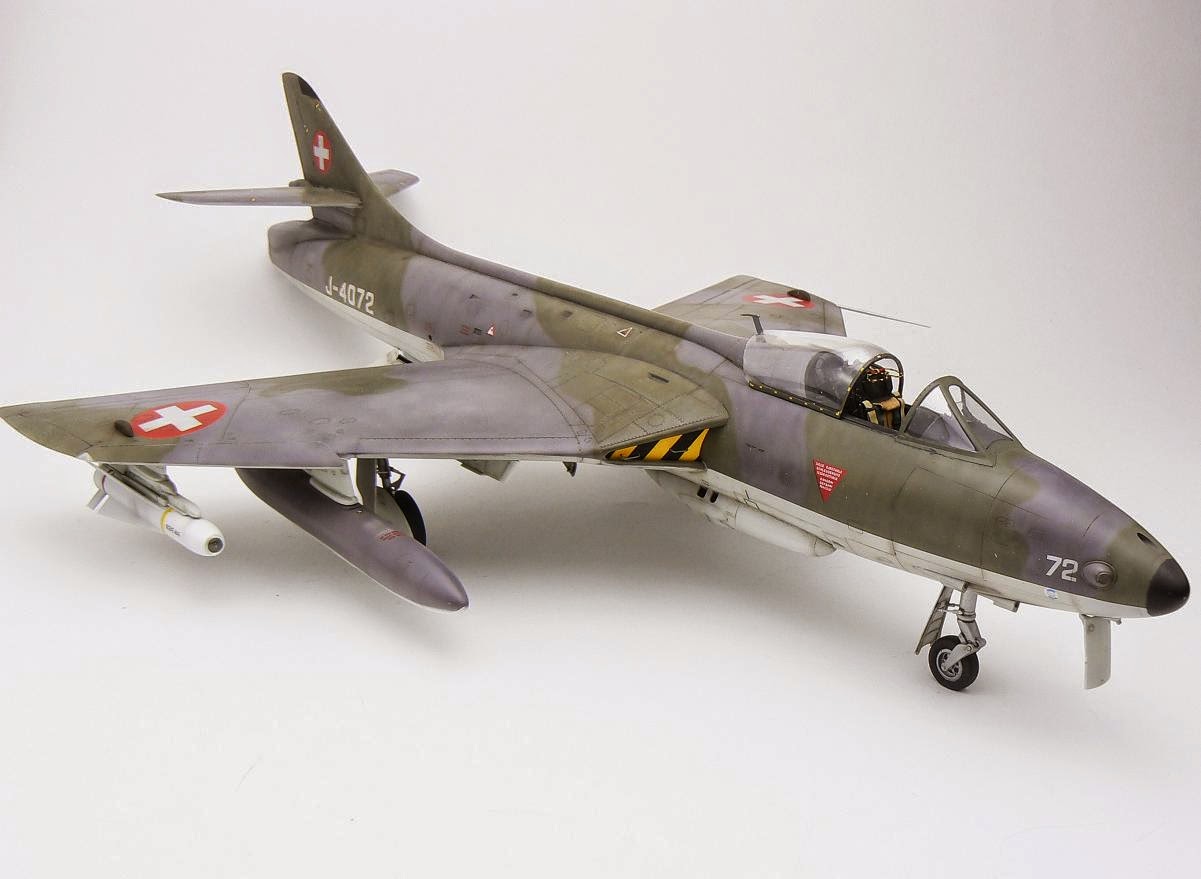 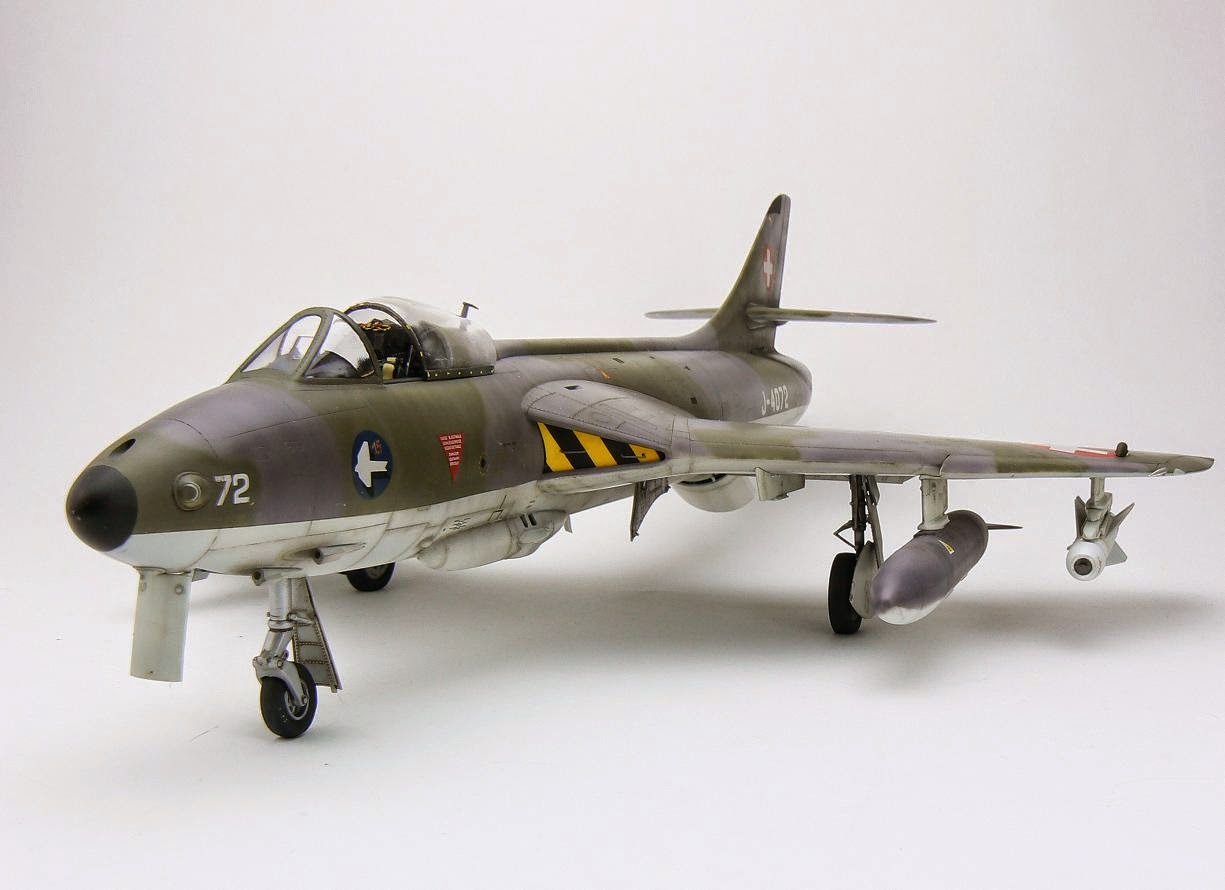 Next was the huge Trumpeter Hind in 1:35.  This had a load of Eduard PE chucked at it but also unusually for me (because I hate building these things) a load of scratch building, mainly in the rear cabin.  Once again I used Mal’s masks for the paint job which turned out rather neat even if I do say so myself!  This model will feature in my forthcoming book of weathering for Mig Jimenez’ Ammo company (more of them in a mo!). 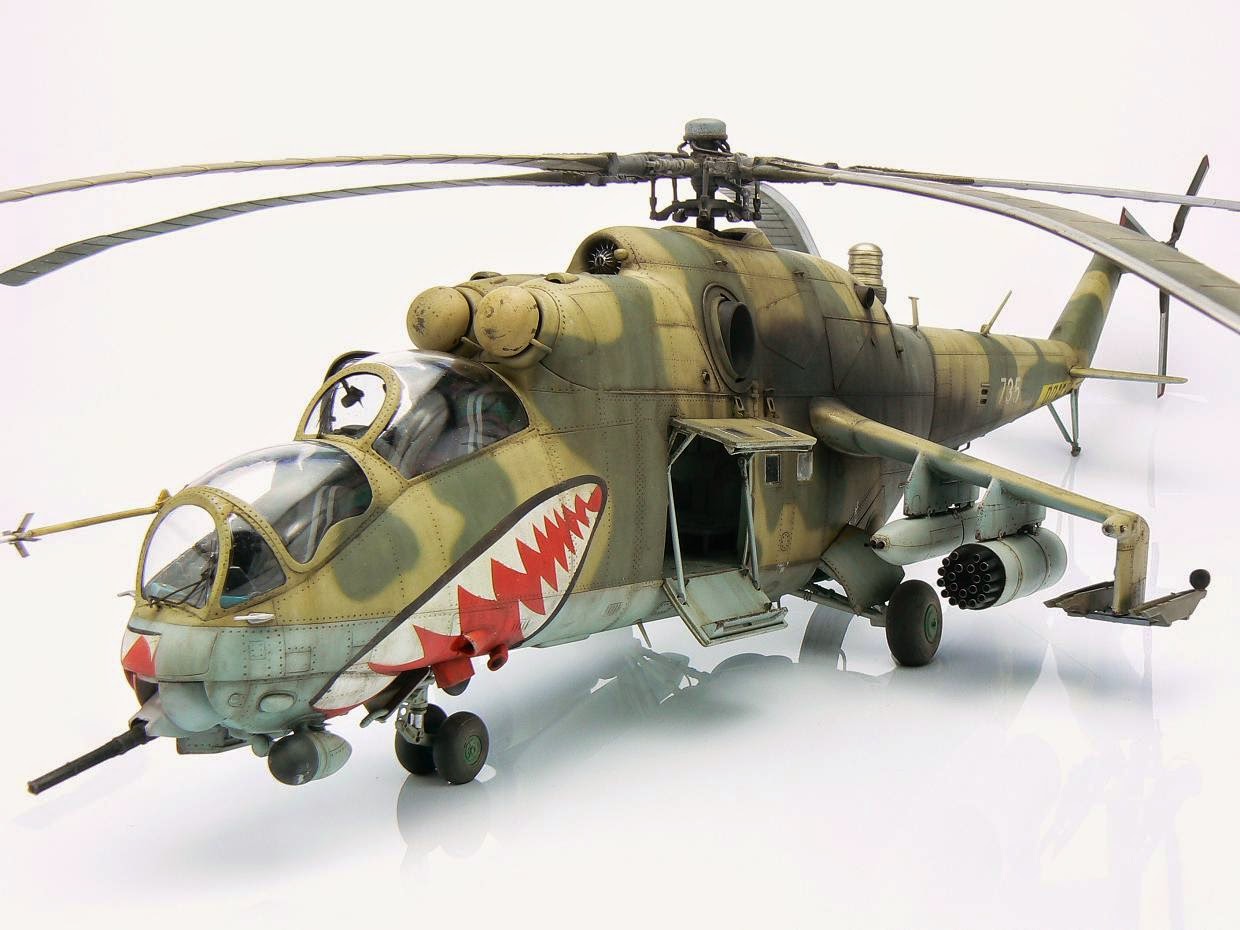 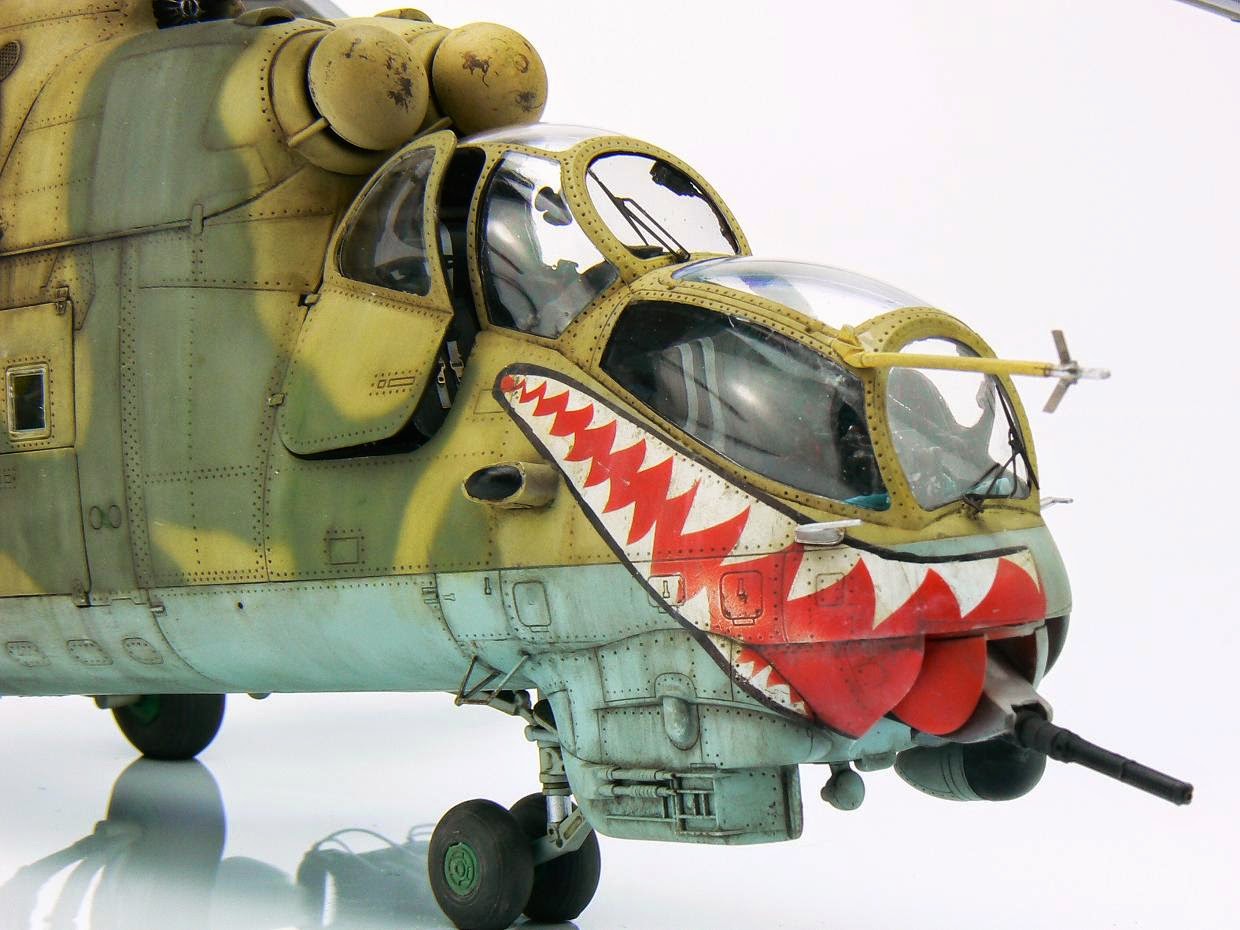 And the last one, the lovely Hobby Boss F-84F in 1:48.  I loved the surface detail on this model, it is sublime but the sparse cockpit lets it down, so much so I broke out the plastic card again and pretty much scratched it!  The wheel wells are too shallow but that didn’t bother me as unless you turn the thing upside down you can’t see them anyway!  The wheels are also pretty wank but there’s not much out there in resin land so I worked with what I had. 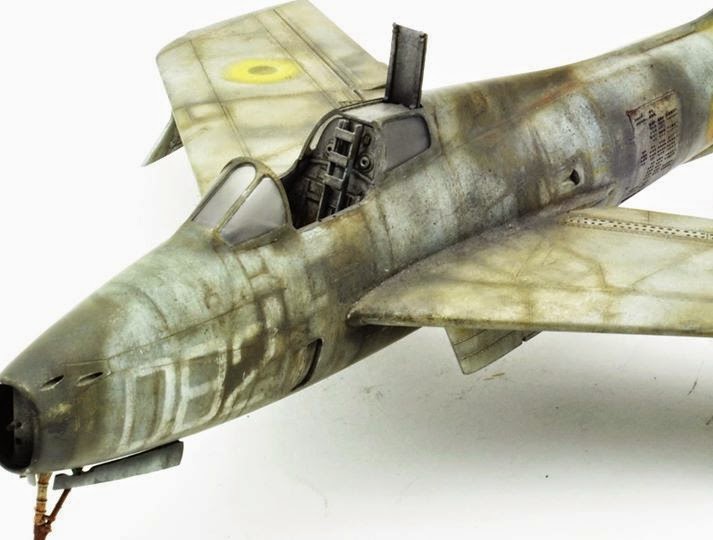 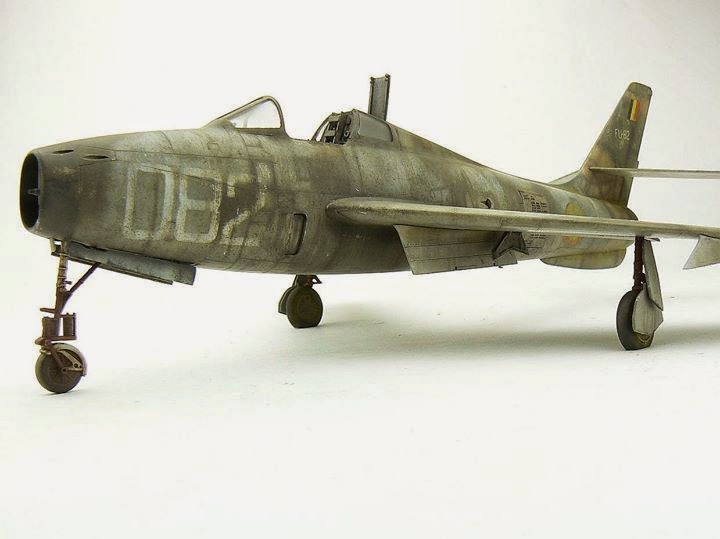 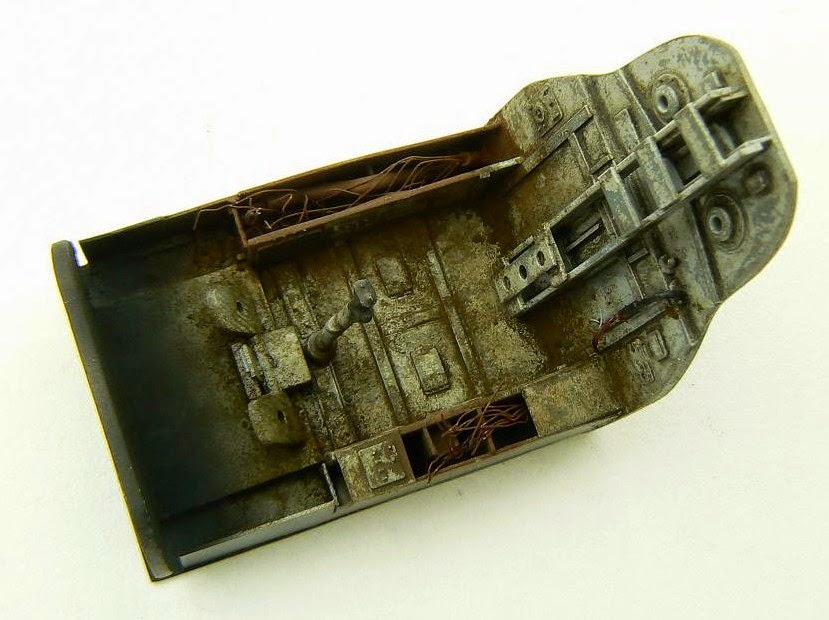 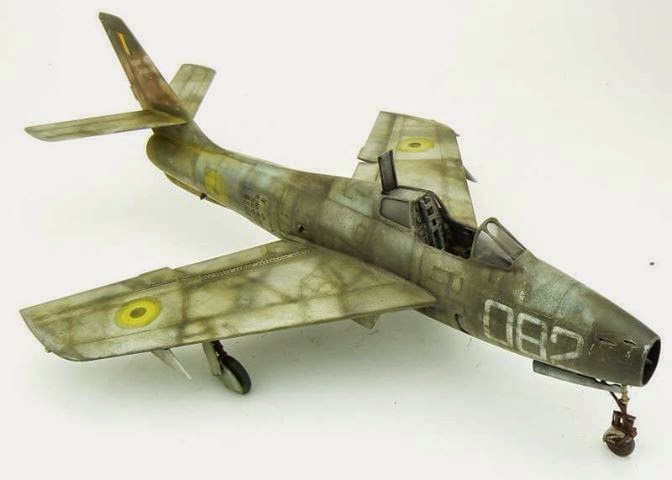 Now, there are another 2 models done but, that’s for another project.  Another book in fact, the publisher doesn’t want any photos of those appearing on the web so you’ll have to wait for that book.  I hope to have all the modelling, and writing all wrapped up next year and submitted to the publishers, then we’ll just have to wait for them to come out.  Please don’t ask when, because I don’t know but as soon as I find out I’ll pass on the gouge.

I’ve got 2 on the bench at the moment, a derelict 1:32 Fw 190D-9 for the next issue of The Weathering Magazine and a scrap yard Airfix Gnat in 1:48 for MAI magazine.  Bother are almost at the painting stage so hopefully I’ll be able to show you the finished thing pretty soon.

Another thing worthy of note is the Scale Aircraft Weathering page I set up on Facebook.  It's turning into a bit of a gold mine of fantastic reference photos for weathered aeroplanes, from the lightly weathered to the derelict and rotting carcass!

I just wanted to finish off talking about Mig Jimenez and Ammo and my involvement with them.  As you know, I contribute to their modelling magazine The Weathering Magazine.  This has been great fun and has allowed me to explore various weathering techniques, not only that but because he’s managed to get the world’s most eminent modellers on board it’s forced me to up my game to keep up!

I’ve been involved with Mig, Carlos and Diego Quijano in developing a range of Panel line Washes.  These have been specifically designed for aircraft modellers and are the perfect consistency for our use being thin enough for capillary action to do it’s stuff but opaque enough for the job.  They can also be used for streaking effects and even thinned to be used as a filter which is neat.  What is handy is the tones have been designed to complement the various camouflages in the sets, this means the modeller doesn’t have to use primary blacks, greys, etc which often result in too much contrast. 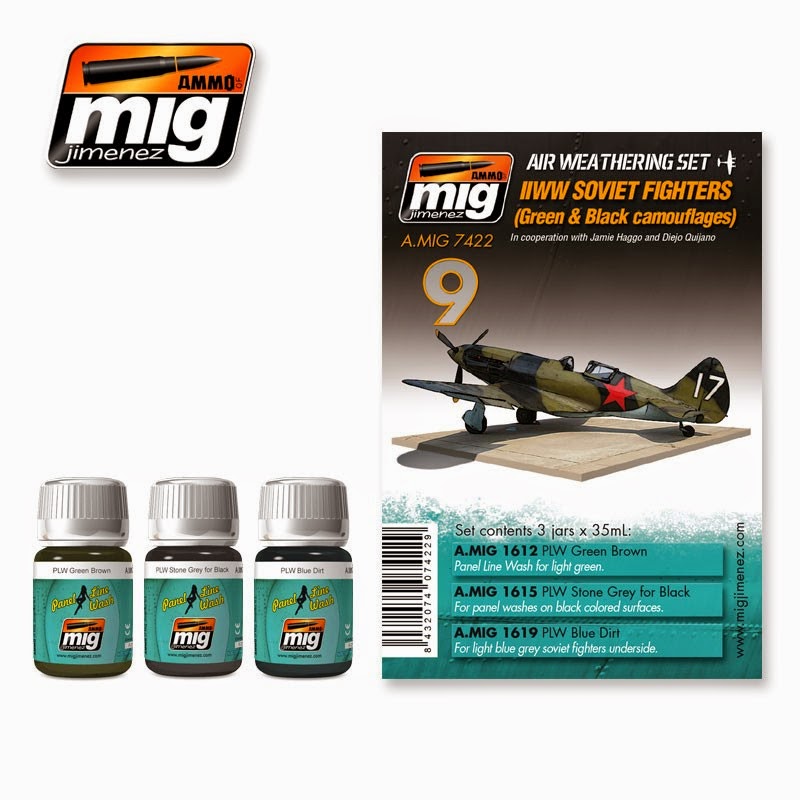 Another product which has just been released are the paint sets for modern aircraft.  Subjects amongst others are post war British, Cold War Soviet, Migs and Sukhois as well as modern US.  All are matched to BS or FS numbers and have been lightened just a touch not only for scale effect but also to introduce a touch of realistically faded paint. 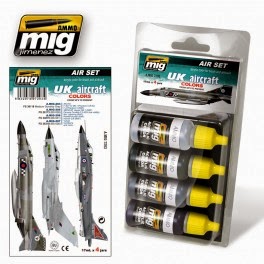 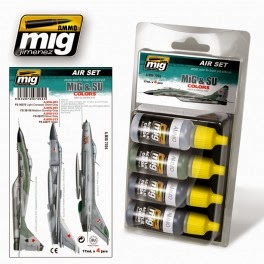 I also have another project with Mig along with my good friend Geoff Coughlin (you may know him from Tamiya Model Magazine and his web based magazine ScaleModellingNow.com) but you’ll have to wait just a little while longer for the details.  I think you’ll like it and tickets will go very quickly!  Stay tuned for more details.

So, that was 2014.  A year of change for sure with some pretty big things getting in the way of the modelling, only 5 completions is low by my usual output but 2015 will be much more stable and with some exciting projects on the horizon.