Hello, and welcome to the blog.  Some of you probably know that I have done a few articles for AK Interactive's "The Weathering Magazine" and in doing so I have got to know Mig Jimenez fairly well over the cyber airwaves.  It was a great shock, as it was to many, that Mig, his missus Elizabeth, Carlos Cuesta, Iain Hamilton and Rick Lawler have parted with AKI very suddenly.  Now I am not going to speculate on the why's and the wherefores as I am not qualified to do so, I simply don't know anywhere near enough of the behind the scenes information.  What I do know is Mig is a really nice guy, he has helped me immeasurably with my AFV modelling which in turn has had a dramatic effect on my aircraft weathering as many of the techniques I employ today have a direct read across from that genre.  He even very kindly designed the banner for this blog at his own insistence.

So, I'd like to let Mig know publicly that I am behind him all the way and wish him every success for the next chapter.  He is the type of extremely talented chap that will come bouncing back better than ever I am sure.  The Weathering Magazine (which is all in his name) will still continue albeit there is bound to be some disruption as the mess is sorted out but if you are a subscriber I urge you to be patient.  Yes I know it's frustration if you have paid in advance for issues but I think we all know that Mig is professional and the magazine will resume very soon.  All the best mate, we're all behind you.

Onto the modelling.  Below are a couple of images of the Tamiya Corsair which will appear in issue 51 (the next issue) of AIR Modeller.  If you've read previous blog entries, you'll know that initially when this model had been announced I was not all that enthralled, I was hoping for something like a Hurricane or maybe even a Mosquito.  I was sure it would have a Merlin engine.  If not, then a DB605, I'd love to see them tackle a 109.  Anyway, having put all thoughts of the model out of my mind I was asked by David Parker if I would build the review sample for AIR Modeller, I had a little think and dug  through some references for inspiration.  Pretty much every picture of a USMC aeroplane showed a filthy, worn out combat veteran which gave loads of weathering potential.  I was hooked and shortly after the box arrived.

Clearly I shan't reproduce the article here!  What I will do is present a couple of pictures of the finished model.  I have written a pretty lengthy article with plenty of progress photos which hopefully won't suffer too much from the dreaded editor's hatchet!  One thing I have repeatedly mentioned in the article and will again here though is the importance of reference material.  So often we hear modellers talking about accuracy of this shape and that dimension but what they always fail to include is the accuracy of finishing.  Now here I am on a sticky wicket as in my mind modelling is art and therefore open to an individuals interpretation.  Also, at the end of the day we all enjoy modelling as it is a personal hobby; its just for us.  Agreed there are blokes (and ladies) who have this as their day job and thank goodness for them, but really we, as consumers, are free to enjoy our hobby and do things just as we like.  However, in my mind it you are concerned with accuracy of shapes and dimensions then you must also have to include how that model is painted and weathered.  For me this part is very important and takes precedence therefore I will use that large armoury of techniques and products in order to reproduce what I can see in the reference material.

Enough of that though, I must say a shout out to Roy Sutherland of Barracuda Studios who sent me his resin bits for the engine and wheels plus the decal placards and also Mal Mayfield of Miracle Masks who produced the bespoke vinyl marking mask set.  All of which really helped to make what I think is the best model I have made to date. 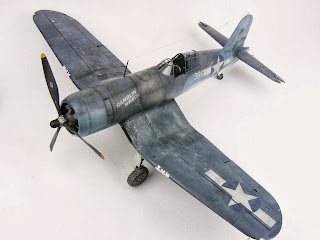 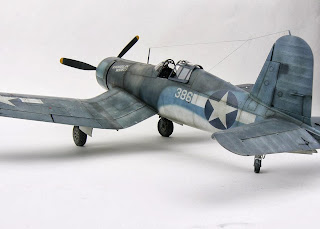 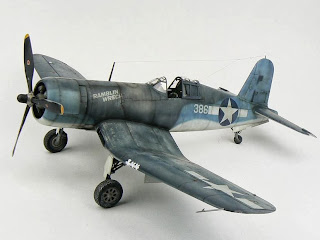 As you may have seen in the last instalment of the blog, work had commenced on the Academy F-4B Phantom; well, I wanted to concentrate on the Corsair and get that one done consequently I have made no further progress.  However, I did have a few days before coming home on leave for a week or so, so I've actually started another kit, the Hobby Boss MiG-17!  This is also for The Weathering Magazine and will go with the Phantom.  I wanted to get the fuselages together as leaving them for a week should, hopefully, mean that the mid fuselage seam will have time to fully cure and fingers crossed there should be no shrinkage.  I need to scribe a panel line where the join is so again, hopefully this should be fully cured and be an easy task!  I'll have to see when I get back. 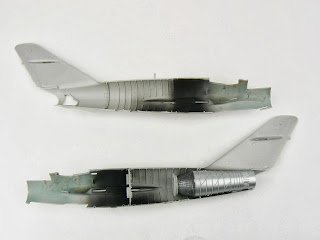 The cockpit is straight from the box as the canopy will be shut on this one, I'm going for a quick build in order to concentrate on the painting.  The instrument panel looks hideous but none of it will be seen.  The seat is from Quickboost and to be honest looks a bit anaemic in there, it kind of gets lost so I may use the kit seat.  I'll have a look and decide just before I put the canopy on. 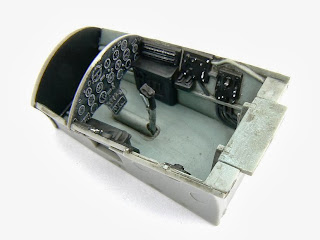 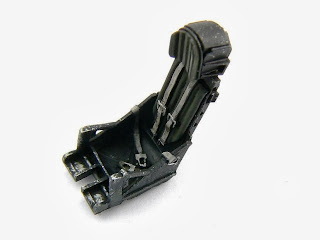 The centre nose splitter has had a base coat, looks suitably chipped!  The next stage is one I am not looking forward to, sanding, filling and scribing; YUK! 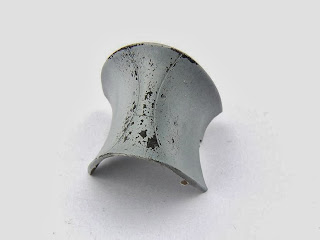 So, there we are, another blog entry.Quite a lot of words and not much in the way of photos but hopefully in the next blog I can show you a lot more of the construction of both the Mig (as in 17 not the Jimenez type) and the Phantom.  Although talking of the Jimenez type, I hope there will be something very positive there too, fingers crossed.

Until next time, happy modelling and don't forget to look at those references! 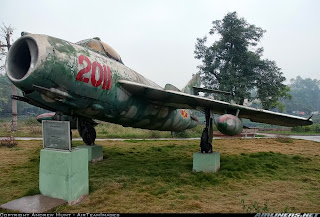