Ok, at risk of blowing one's own trumpet I did fairly well at Telford in the competition.  I ended up with 1 Gold, 2 Silvers, 1 Bronze and 2 Highly Commended.  Plus, second in the after market decal trophy and Best Allied Aircraft.  Not a bad haul.

With that trumpet fanfare you might think I'm happy.  You'd be right,I am, however this competition just proves that competitions are all down to the individual preferences of the judge.  A few blokes who have their own opinions hold sway, they award the prizes and that's that.  Did I agree with the results, not necessarily, models which I thought would do well got either lesser awards or none at all, models which I bunged in to make up the numbers did better than expected and one or two other models which did better than mine were, in my humble opinion not as good.  Still, seeing it's all down to a couple of individuals I didn't really lose any sleep.  Last year I got a bee in my bonnet about some of the judging, not in my classes you understand but in some of the others.  The best way I thought was to volunteer and judge myself so this year I did just that.  I was paired up with an "experienced" judge, good I thought, he knows what he's doing.  Unfortunately though this turned out not to be the case.  We judged a particular class and he picked out a model that had been dry brushed to within an inch of his life; "look" he said, "that dry brushing is lovely".  I really had to bite my tongue, we were 2 hours into it with no hope of parole and I was losing the will to live.  I tried to explain that the model looked horrible because of all the dry brushing and the very fact we could tell it had been dry brushed meant it wan't subtle enough.  I was then told that he was an experienced judge, had been judging Air Cadet modelling competitions for many years and dry brushing was an advanced technique.  It took all my self control not to knock him out, so I decide to laugh rather than cry, get him to bloody get a move on so we could come to a decision as the pub was opening in about 4 hours time and I needed a beer!

All that rambling has led me to make a decision, I won't be entering any models next year.  I think there is a "style" that does well in the Telford competition which doesn't fit in with mine.  For me, not enough weighting is placed on finishing, weathering, subtlety and realism.  I've got my awards so I'm walking away smiling and satisfied.  Whilst it's nice to get recognition in the form of trophies and awards I'd rather get it from my peers and modellers who I hold in very high regard.  Sour grapes?  No, not at all.

I wish there was a competition for aircraft run along the lines of Euromilitaire, a competition concentrating on the finishing and the art of modelling judged by professionals and experts in the field rather than enthusiastic amateurs.  That's not a dig at IPMS UK and SMW at Telford, far from it.  I thoroughly enjoy Telford and everything that goes with it including the competition it's just that I think things in the hobby have moved on and that particular competition is lagging behind.

Anyway, enough competition politics etc, it's dull.  On with the modelling and I've finished the T-55.  This model will be described fully in an upcoming Military Illustrated Modeller  magazine sometime next year.  It's had quite a bit of improvement, Eduard PE, Fruil tracks, CMK dozer plus a whole bunch of scratch building. 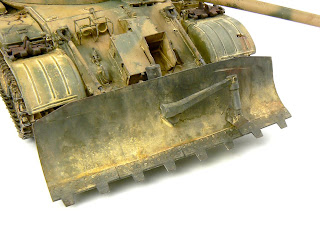 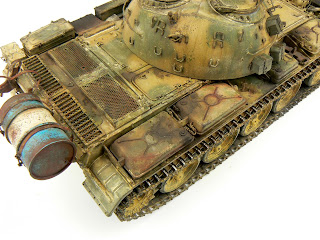 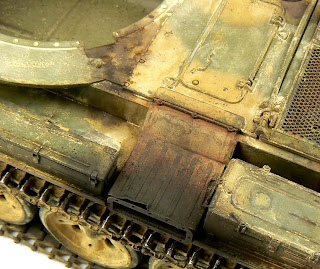 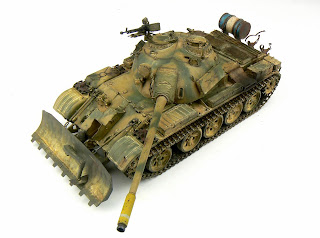 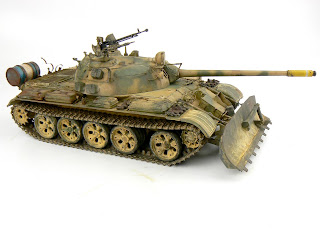 I've also finished another commission, a P-40E.  This model was inspired by Brett Green's model in his Osprey Modelling the P-40E, David, the chap I was building this one for didn't want a 112sqn aeroplane as he already had one in his collection so I did a bit of rooting around and came up with this scheme.  I liked it so much I'm going to do this one in 1:32. 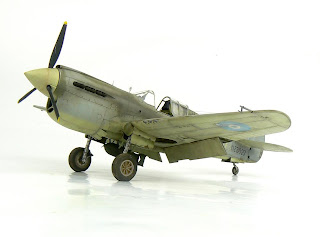 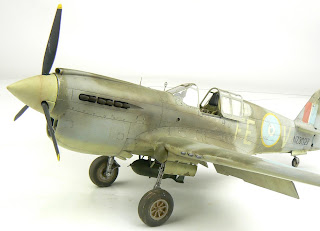 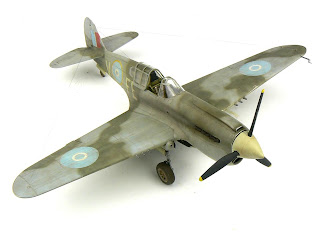 Ok modelling mates, that's it for now.  My next blog will detail my latest foray into land based vehicles, it's something rather different and I hope you'll like it.  I'll try and stay away from the controversies as well!  Anyway, until then......
Posted by Jamie Haggo at 13:48 No comments: