Hello one and all, and at last an update!  When I looked, it had been over 2 months since the last one!  Maybe that's the reason I've got loads to show you in this update.  The next one won't be as long, by the end of this my fingers will be killing me from all that typing!!!

First up the armour side of things.  I've really got into this in a big way now; the reason?  Well, that is all to do with the second item in the title, weathering.  In my opinion, and it is only my opinion, a model of a military vehicle can look as real as it gets whereas it's very difficult to make a model aeroplane look real.  This is all down to the fineness of the kits and the technique that's used to weather them.

Ooh. controversial.  Maybe, but then I suppose this is my blog and I can say what I like.  However, I've seen some lovely model aeroplanes in my time, some look almost real however I've seen some models by the masters such as MIG Jimenez, Spencer Pollard, Mike Rinaldi, Adam Wilder and others that do look real!  In fact Mike has a die cast bulldozer on his Facebook page at the minute, it's just incredible.

Anyway, on with my models.  First up is the dragon Panther Ausf A.  With this model I finally achieved an outcome that I am pleased with, using all the techniques from the last couple of armour models I've now developed my skills to what in my eye is an acceptable base standard.  My aim is to get as good as those blokes I've mentioned, will I ever achieve that, not any time soon but maybe one day.  It's important to set goals I think, it spurs oneself on.  So much so my aim is to win something at Euromilitaire with 5 years and get something published in AFV Modeller magazine, I hope I can achieve those, who knows!  The build article and finished photo gallery can be seen here;  http://www.scalemodellingnow.com/ 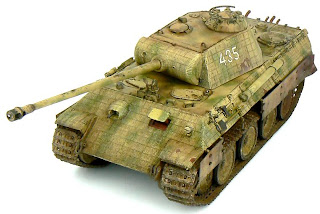 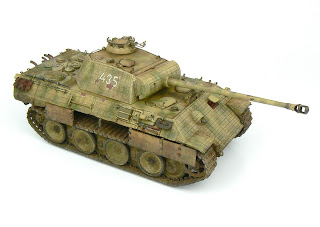 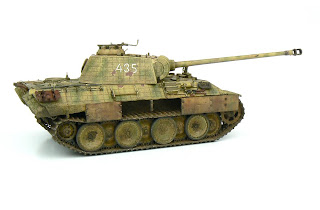 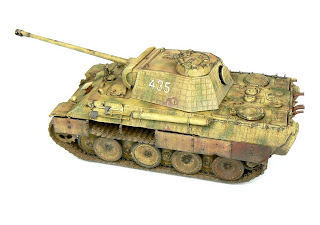 Ok, next up are 2 models which are still in the works in progress stage.  The first up is the Tamiya T-55 in 1:35.  Way back in 2003 I bought Tamiya Model magazine, the reason I bought that issue (the first and only issue I've ever bought) was because of Marcus Nichols' Iraqi T-55 which adorned the cover.  That model jut blew me away and I always hoped I'd build one, one day.  Well now I have.  Even though it looks to be almost finished there is still an awful lot to do, I've done the chipping, filters and wash but there's still the oil fading and shading, pigments, dusting, streaking grime, rain marks, tracks, dozer blade, rust and spilled fuel/oil to do!  Hmmmm, quite a bit then! 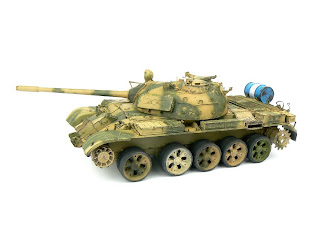 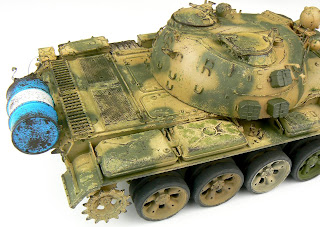 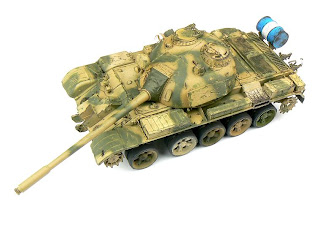 Moving on the the other armour work in progress and blimey, is this a monster.  It's Tamiya's Tiger 1 in 1:16.  This is a commission and the kit arrived on Tuesday built and painted by the previous owner.  So far it's been primed, undercoated with Life Color and had a top coat of Dark yellow.  At the moment I'm in the most mind numbing tedious stage, the chipping.  In fact, it's so unbelievably dull that I had to have a break, hence the blog update! 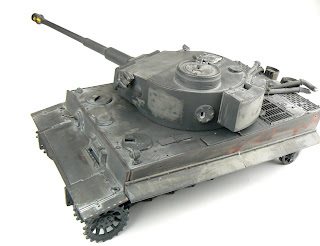 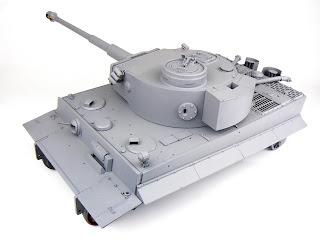 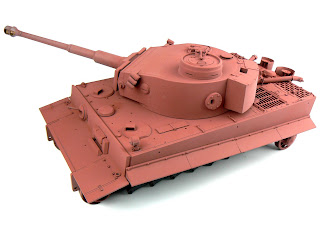 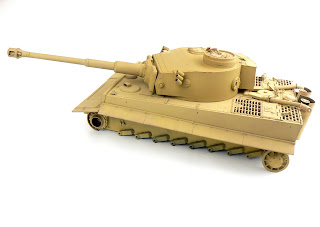 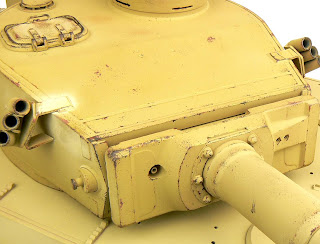 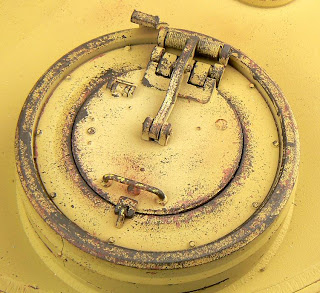 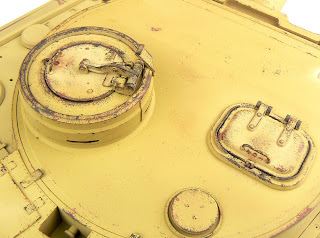 Right, that's the armour dealt with, on to the aeroplanes.  Both my latest are Fleet Air Arm aircraft which is poignant as we are about to celebrate one of the Fleet Air Arm's most famous actions, the Battle of Taranto.  I always get a wry smile getting invited to celebrate the RAF's draw  in the Battle of Britain!  As Ben Elton would say, "ooh, a little bit of politics!!"  Anyway, enough Crab bashing (It's only banter fellas), back to the models!

First up is the wonderful little Eduard Hellcat which was almost called the Gannet in Fleet Air Arm service, what were they thinking!  The comparisons with the Tamiya Corsair are obvious and I reckon this is better.  It's better detailed from the box and fits better (the Corsair needs a smear of Mr Surfacer on the port wing root and the starboard flap, trust me, I built loads and they all needed it).  You get a small photo etch fret, canopy masks which are most welcome and a Cartograph decal sheet.  All that for the same price as the Tamiya model.  As I mentioned, this is a FAA aeroplane which is not included in the decal sheet, I used an aftermarket sheet from Techmod and jolly nice they were too. 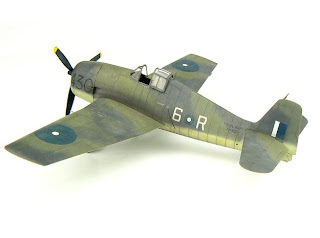 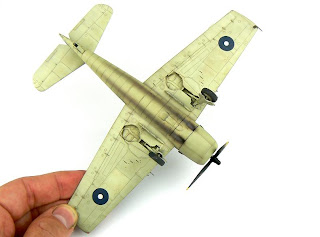 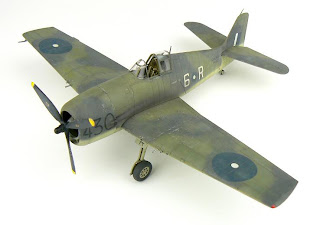 Hang in there, almost at the end.  The last model is the new Italeri hurricane.  This is also a nice kit but not as refined as the Eduard offering, she needed filler on the wing roots, the tail planes were too thick for the roots and the gun insert fit was woeful.  The engine is nice but undersized and is a bit gimmicky, best wait for the inevitable Quickboost replacement I reckon.

She's again painted up in Fleet Air Arm colours, this time I got some custom masks made up from Ian at Ad Astra masks and they worked wonderfully.  There is a colour photo of this aircraft knocking about, it shows a filthy, clapped out aircraft which is wonderful for a bloke like me seeing I love weathering so much.  I used various effects from my AFV toolbox such as filters, washes and oil fading.  All in all it was a very enjoyable project. 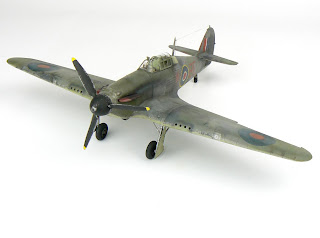 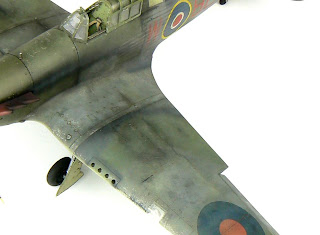 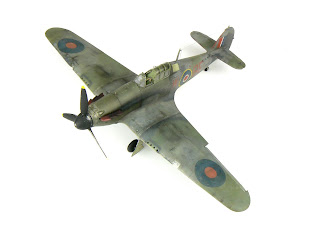 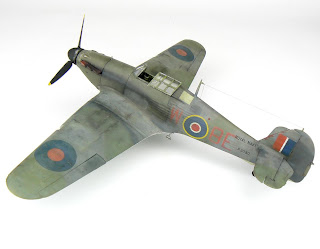 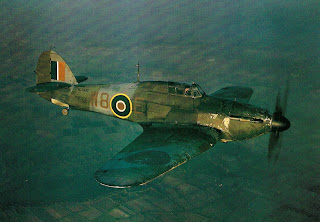 Both the above models will be at Telford on the IPMS SLAM tables so if you're going and want to have a look you know where they'll be (before being given to MAI magazine).

The last model I want to show you is a Roden Strutter.  This was a commission and isn't my normal sort of thing, still, I was quite pleased with how it turned out.  I wouldn't make another one though, the Roden Strutter that is, all the major parts were in clear plastic!  A stupid idea, oh well, I got there in the end and the client was happy. 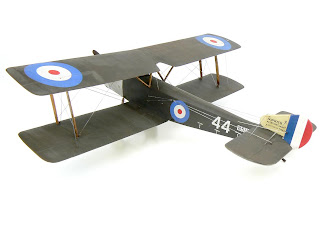 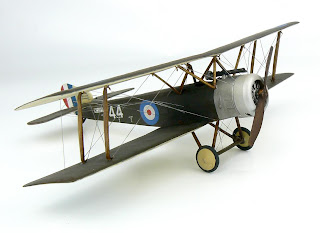 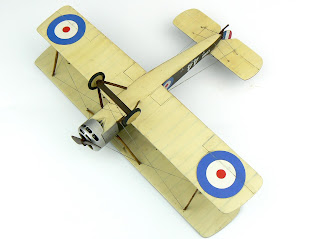 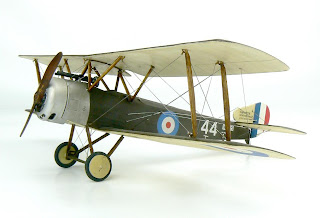 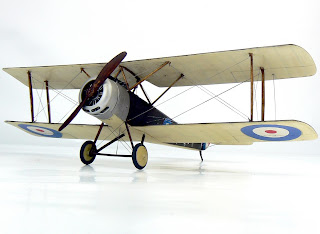 That leads me nicely onto the last topic, Scale Model World at Telford, the biggest model show in the UK, maybe Europe or even the world!  I just love this show, not only can I get anything I want from the myriad of retailers, but it's a chance to catch up with old friends and meet some new ones.  If you want to meet up I'll be hanging around the IPMS SLAM tables and doing a few demo's with Guideline publications throughout the weekend.  It's what I love best, models, mates and beer!

Jamie
Posted by Jamie Haggo at 14:17 No comments: