Well, what a relief it is to be back.  Since Christmas I have been studying hard for the biggest exam of my life and now having passed it, it means I am officially "Above Average" and will hold the qualification for life.  The A2 as it is called is the pinnacle of being a QFI (Qualified Flying Instructor) although there is the A1 but then only the clinically insane attempt that!  The day itself is rather stressful, an airborne sortie where you have to teach an exercise to the examiner (one of CFS's Exam Wing instructors), who pretends to be a student (universally known as "Bloggs"), he then morphs into a more advanced student who is struggling with an advanced aerobatic manoeuvre so you have to re-teach him how to do it properly, then show your general handling by flying your aerobatic sequence amongst others, you then get an emergency to deal with all topped off by a Practice Forced Landing and circuits.  In the afternoon its into the classroom where you have to "teach" Bloggs various aerodynamics, principles of flight, met, flight instrument theory and various technical aspects of the Tucano.  Phew!  But its all over now and potentially it will open many doors professionally for me (although no pay rise unfortunately!) but for the moment I'm staying where I am teaching the next generation of Naval and Air Force fighter pilots to fly the Tucano.

The rather fortunate bi-product of passing the assessment means I can get back to some modelling and to be honest I've really rather missed it.  Over Christmas I finished the fuselage on the 1:32 Revell Hunter and the wings.  Now I can detail the wheel wells with the Flightpath photo etch set and the flaps and when that's done, bring the airframe together.  That shouldn't take too long so soon I'll be able to start painting!  This will be painted in Swiss markings so there won't be too much scope for weathering, just enough to keep it interesting. 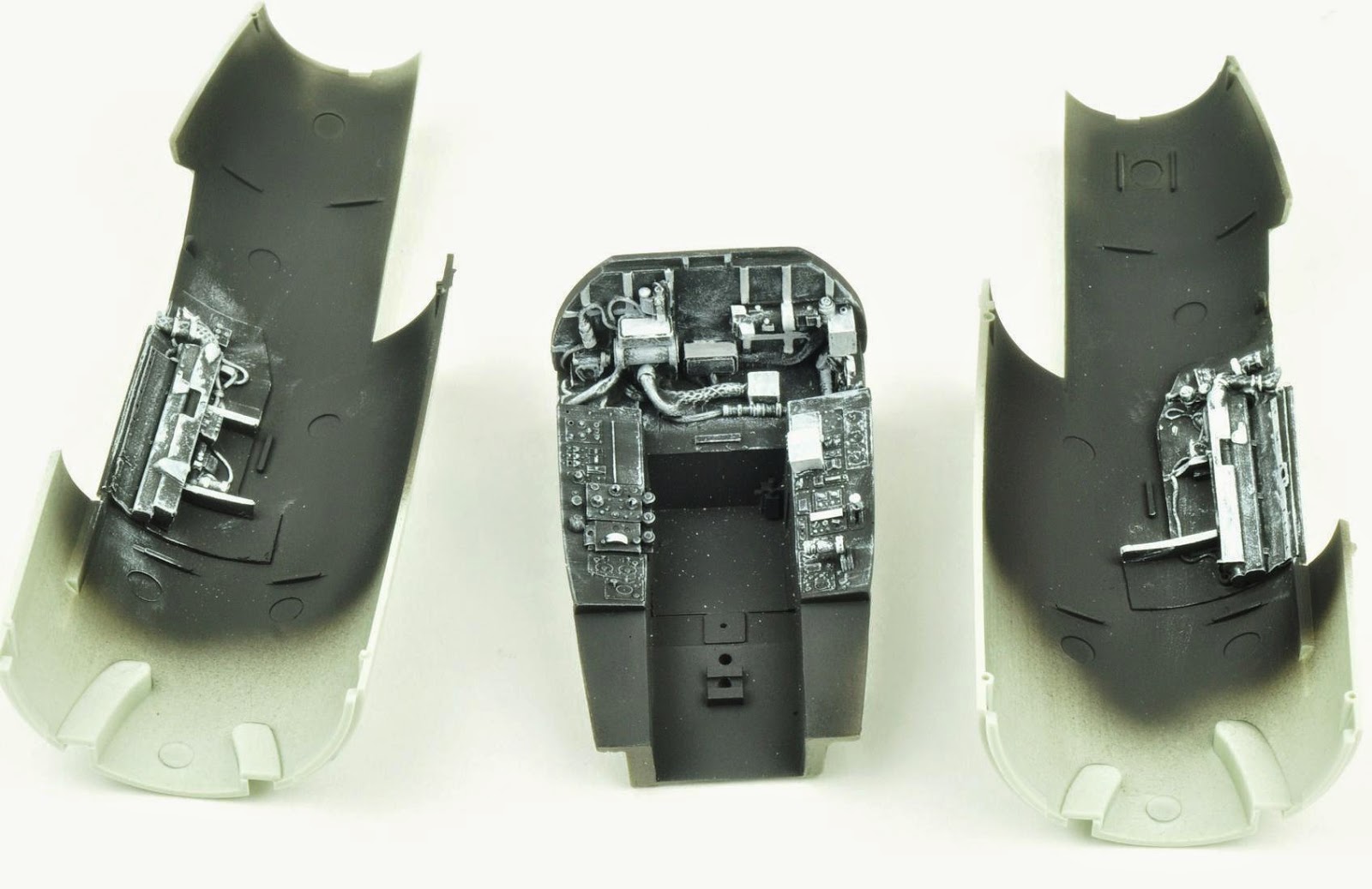 As if I haven't blown my own trumpet enough, there's more.  I have been working with Mig Jimenez's Ammo along with Diego Quijano and Mig himself to develop specific weathering products just for aircraft modellers.  For too long the AFV lot have had it their own way and these products have been developed specifically with the aircraft modeller in mind.  Brand new is the Panel Line Wash or PLW, these have been formulated to highlight panel lines in a subtle and realistic way.  The tones have been specifically designed to compliment the specific camouflage scheme and will dilute with white spirit to make a filter to blend and soften the original paint work. 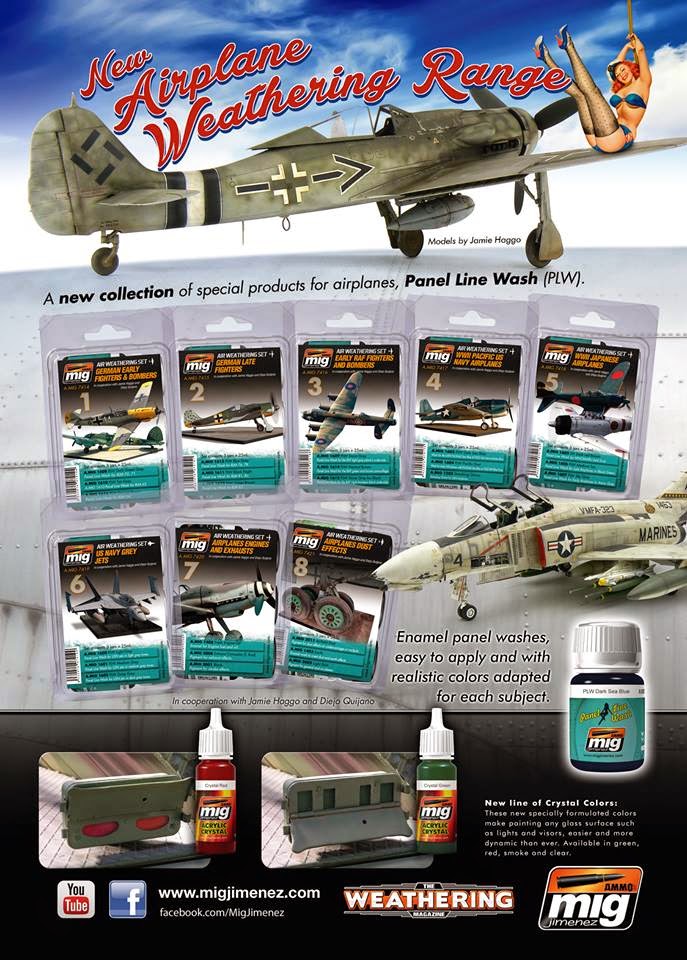 On the subject of Ammo, the next issue of The Weathering Magazine is about to hit the street.  Some of you may recognise the Ju-88 on the cover!  A full step by step article on the weathering and finishing is included although sadly the new Ammo PLW line was not ready when I made the model. 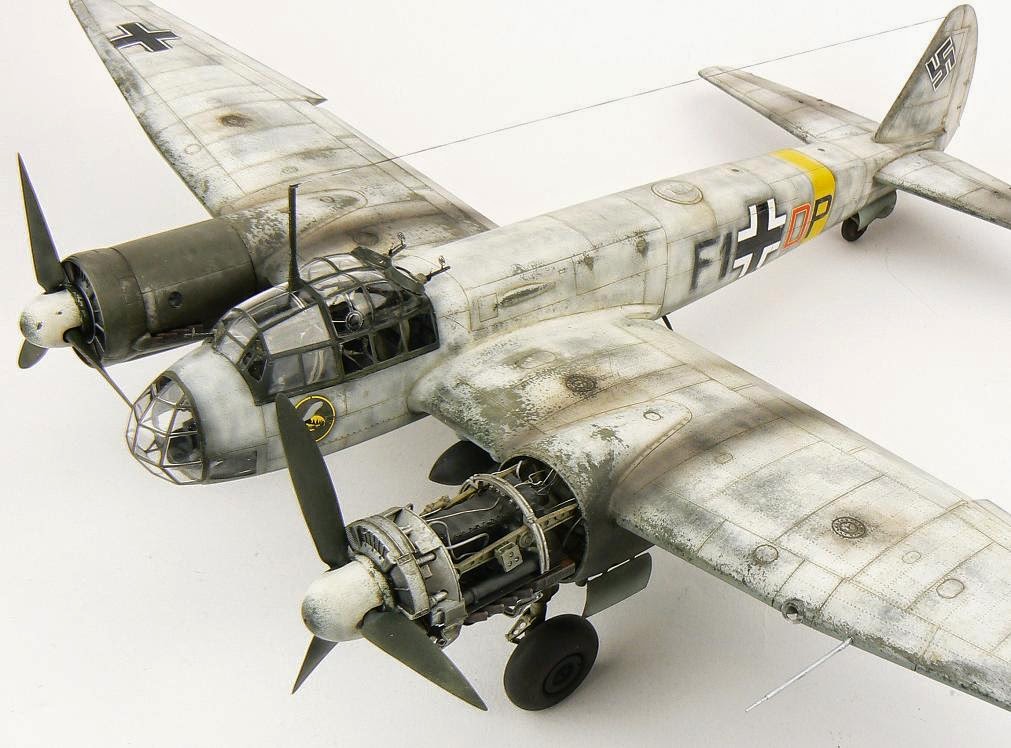 Yet more trumpet blowing!  The Scale Aircraft Weathering Facebook page has really taken off with almost 2500 "Likes" since I set it up in October.  It's proving to be a great resource with a steadily growing collection of weathered aeroplanes from pre war stuff, through to modern jets and even airliners!  There is some wonderful inspiration for some potentially stunning models so why not check it out.  Feel free to post you own pictures of weathered models and if you have them photos of the real thing so we can all look, study, learn and enjoy.

Ok, that's enough of the brass band!  Its great to be back and as I said, I'm really looking forward to hitting the bench again and cracking on the with the Hunter.  Don't forget to check out the Ammo stuff and the Scale Aircraft Weathering page on Facebook; until next time happy modelling.